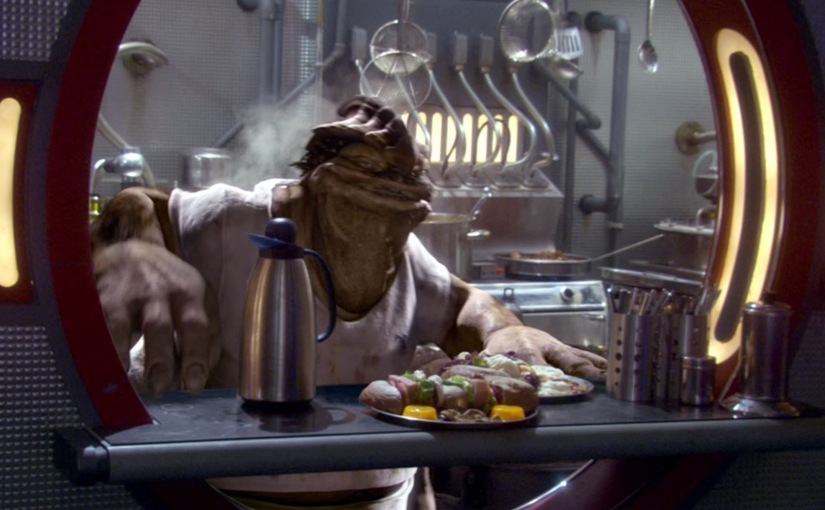 Once, in a kitchen not so far far away:

“I think I’ll get a new fridge at the weekend,” Teflon Man announced last weekend.

In fairness, our fridge has become increasingly broken for about 5 years. First the water filter stopped working, then the ice cubes, then the freezer and then the top two shelves of the fridge. The freezer has now started to smell of death!

Needless to say, TM hasn’t bought a new anything. He hasn’t even been anywhere near Curry’s website.

As ever I’m disappointed, but not surprised.

The other appliances, however, have clearly overheard the conversation and are standing firm alongside their about-to-be-abandoned comrade and have formed the Rebel Appliance!

First the dishwasher went on strike. We’ve only had it about a month, inherited from my mother-in-law in exchange for buying her a house last year. A month is just long enough to get used to having it; to marvel at the joy of not having a sink perpertually full of dirty dishes and the way the glassware glistens. Except then the dishwasher decided that pumping water at any sort of pressure was a job too far for it now we’re back to washing things by hand.

The trouble with hand washing is complicated by the fact that the sink is also blocked somewhere and takes an eternity to drain, thus leaving a gradation of grease around the sink after a session with the pans. This is not due to any solidarity with the fridge though. This has always been the case (either due a bodge of a plumbing job on installation, or possibly a ghost baby).

Sink, though, you are an even bigger arsehole.

The cooker is also on the fridge’s side and has started the long slow road to non-function by degrees. This week the smallest hob stopped working. With no reasoning behind it, it just decided to stop.

The cooker was also inherited from mother-in-law’s house move, replacing one so old it had guess marks rather gas marks and pans had to be balanced so precisely due to the worn away pan stands they could have joined Cirque de Soleil.

I loved having a new cooker so much! The ability to know that things are being cooked at the right temperature and with oven doors that actually click shut! (The old ones had to be held closed with a briefcase of bricks!)

At least my old cooker used to ignite! New cooker, you too are an arsehole!

The microwave will also spontaneously set itself on a timer loop, the digital display going crazy of its own accord. At least I can unplug it until it’s needed. But it’s still being an arsehole.

I fear it’s also only a matter of time before the toaster and iron join the ranks of the Rebel Appliance.

Just as long as the washing machine doesn’t defect I think I can cope though. Although don’t let the appliance alliance know my weak spot, otherwise I’ll be wringing out pants in the bathroom sink by the end of the week and nobody wants that!

I thought household appliances were meant to make life easier. Ours are just further additions to The Shit I Have To Put Up With.

There are some upsides to a broken fridge though. If the wine won’t stay chilled you just have to drink it all in one go. Is “the fridge made me do it,” an acceptable excuse for alcoholism though?

But never mind, Pixar will hopefully be hot on my heels for a future animation where kitchen appliances get feelings and fight together against being sent to the dump. I hereby claim copyright in the hope that they’ll pay me enough for me to afford a new kitchen with non-rebellious appliances. Which, after all, is probably more likely to happen than TM finally getting round to buying a new fridge!

9 thoughts on “Kitchen Wars: GSM vs the Rebel Appliance”